We've had two sessions of the Wilderlands Marklands Campaign since I last posted.

Unfortunately, I have not had the gumption of late to write out full session reports, so I'm just going to cut to the chase.

Session #2: The party decided to investigate the secret door in the temple. Below they find a secret temple complex dedicated to the original Spider God, Yezud. After being totally ambushed by some giant trapdoor spiders and an Ettercap, the party regroups and slaughters them. They then discover the missing dwarf merchant and sailor, webbed in the main temple, rescue them, and hightail it out of the dungeon. They grab the other sailor and his son and make a beeline for the dock, even as the hue and cry is raised... not for them, but for some other force that is invading from the land and setting fire to the huts as they come! The party makes it back to Finmark without further incident, are given their rewards, and rest and relax.

Session #3: After going about town a bit and checking out opportunities, the party decides to explore the ruins of the Finborg to the north. They make preparations and re-equip, as they realized last session they were not equipped for a dungeon expedition. The pass on to the north along the shore of the Perlevik, stopping briefly at the Wizards Tower on the Gloedenvik before deciding it was wiser to leave the wizards be for now. They passed through Blauvik without trouble, and finally made their way to the ruined castle. They managed to explore most of the gatehouse, thus far encountering some giant rats and getting caught by a classic stairs-to-slide trap that left them piled in a heap on the group.

Right now the campaign is on hold for a month, as people are adjusting to new schedules due to the seasons, the opening of other opportunities due to the vaccine, and one of the players moving across country. 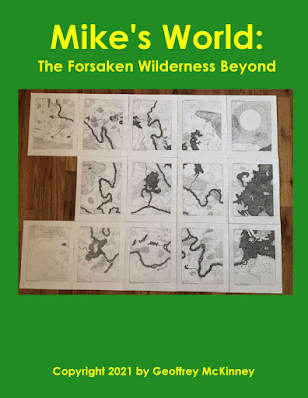 For the rest of the group, in place of the Marklands game which is 5E, I am running a B/X (Labyrinth Lord) dungeon delve into B1: In Search of the Unknown. The players were all introduced to D&D with 3E, and they have never played B/X, nor run through Quasqueton. I am using B2: Keep on the Borderlands combined with Geof McKinney's new and MOST EXCELLENT Mikes World: The Forsaken Wilderness Beyond for the local wilderness and home base (so they are operating out of the Keep). I have placed Quasqueton beneath the feet of the bandits on the Keep Wilderness map at #3, and the party has already had a run-in with the bandits and have discovered the entrance to Quasqueton.

I should have a review of Mike's World up on my blogs soon. It is yet another product from Geof that I wish I had written myself. It is a classic, Old School/Judges Guild style campaign setting.

Posted by James Mishler at 4:34 PM