[Ravaged Ruins of the Roglaras] The Scarlet Skull, a Ship of the Damned

0604 SHIP OF THE DAMNED: Several months ago a fierce storm cast the Scarlet Skull, a ship of the damned, upon a rocky promontory, and there the souls of the cursed sailors remain to this day. It was a large merchant vessel converted to use for piracy, and it was split in twain when it crashed upon the rocks. Both sections are mostly rotten, and the forward third, or bow section has collapsed into flinders, while the skull and bone-strewn aft two-thirds (60’ long and 20’ wide) remains the lair of the damned. The undead hide in the stern castle and partially-collapsed below-decks section during the day, and range up to three miles away hunting prey at night – the coast hereabouts has gained a haunted reputation in the last few months. This vile crew consists of 16 intelligent zombies (or Myrkridder Soldiers); Mister Bones, the ghoulish first mate (or Myrkridder Sergeant); Captain Jack Scarlet, a wight (or  Myrkridder Captain); and Hygelak the ghost-parrot (or 7 HD Spirit). 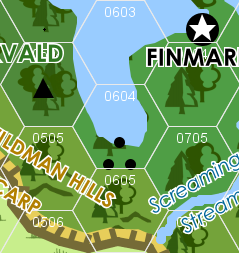 The lair itself has only incidental treasure from the most recent victims of the damned, including two long swords, three daggers, a rusty suit of chainmail, a suit of moldering studded leather armor, 45 cp, 34 sp, and 12 gp. The real treasure is in the crow’s nest atop the intact mast, in a locked iron-bound treasure chest, and consists of 1,376 cp, 514 sp, 723 gp; 6 gems (2x 25 gp, 2x 50 gp, 2x 100 gp); a pair of matched gold candle holders with the symbol of the sun god Adorak Tau worth 1,000 gp; a large gold unholy altar setting symbol of Adorak Tau worth 250 gp; a gold and platinum orb with the symbol of Adorak Tau worth 3,500 gp; three vials of unholy water worth 30 gp each; a Tarantine spyglass worth 1,000 gp; a magical +1 cutlass with the name “Jack Scarlet” engraved on the blade; and an enchanted fist-sized black opal worth 5,000 gp, the infamous Black Star of Garzan, upon which lays the curse that transformed the crew to undead.

The Black Star of Garzan was found centuries ago by the iron miners of Garzan, near Tarantis, and was given to the Taran as tribute. The Taran in turn gave it to the Temple of Adorak Tau as a gift upon the ascension of a new evil high priest – the temple enchanted it and used it as an element in their Twilight Sacrifice ritual for more than 200 years, until a decade ago, when a thief stole it. That thief was the captain, who stole it with the assistance and cooperation of his crew – and so all fell under the effect of the curse, and they sailed the seas as a crew of the damned for almost 10 years.

The gem is cursed such that anyone who steals the gem, and anyone who assists and remains with that person, must make a saving throw versus Spells or be drained of one level per day until the gem is returned. Those who die because of the curse rise again as undead, appropriate to their former level of power – the more powerful the thief was in life, the more powerful he is in undeath. Those who are not clerics of Adorak Tau who take the gem from the thief are, of course, considered by the power of the curse to be thieves themselves. A cleric of Adorak Tau can use the gem to summon a lesser devil once per week and a greater devil once per month; unless cast as an hour-long ritual, the summoning lasts for only one turn per level of the cleric.

There is, of course, due to the Law of Dramatic Resolution, a 50% chance that a search party from the Temple of Adorak Tau happens upon the wrecked ship (d6: 1-2) at the same time as the player characters find it, (3-4) while the player characters are in battle with the undead, or (5-6) right after the battle with the undead. Even if they do not show up right away, they can show up any time wherever the Black Star of Garzan might be found. The search party will demand the players turn over the Black Star of Garzan, the candle holders, the orb, and the unholy water and symbol, but are (mostly) unconcerned about the other treasure.

Kyresh Kylak, the leader of the party, is an evil if honorable man; if he makes a deal with the characters he will honor it as long as they honor the deal. His associate Turek Tan, on the other hand, is not honorable, very ambitious, and quite greedy, and thus will try to interfere with any deal that lets the party get away with the remaining riches – and if the player characters (and Kyresh Kylak) get slaughtered in the ensuing battle, so much the better. The clerics are served by 12 unholy berserkers of Adorak Tau who follow their commands without question and to the death.

Dread Curate Kyresh Kylak, Master of the Order of the Searing Orb (LE male Gishmesh 5th level Cleric of Adorak Tau). He wears plate mail armor, wields a magical +1 mace, wears an unholy symbol of Adorak Tau of gold encrusted with ruby gem flakes (250 gp), and carries two vials of unholy water, 5 cp, 7 sp, 150 gp, 40 pp, and the Search Stone of Garzan (a shard of black opal from Garzan worth 100 gp, enchanted to direct the holder to the location of the Black Star of Garzan).

12 Unholy Berserkers (LE to NE male Gishmesh or Karakhan 1st level Fighters). They each wear studded leather armor with great helms, wield falchions, daggers, and short bows, wear a bronze holy symbol of Adorak Tau (5 gp) and carry 2d6 cp, 2d6 sp, and 3d6 gp. The lead berserker carries a standard bearing the holy symbol of Adorak Tau and the banner of the Order of the Searing Orb; the standard is worth 250 gp.

The whole party is mounted on riding horses, complete with saddles and tack, and saddle bags containing camping equipment and food, water, and wine for 14 men for two weeks, The saddle bag of Kyresh Kylak contains a small sack holding 87 pp and 13 gems (100 gp value each).
Posted by James Mishler at 4:09 AM