I was considering doing the A to Z challenge this year, but just don't have the gumption. I do, however, want to continue work on a series I've been toying with on and off for the last 20 years -- the Ravaged Ruins of the Roglaras. The original listings for Region 01 never included a Ravaged Ruins entry, so I long ago set out to fix that error. Hopefully, I will finally complete the list this month. And even if I don't, meh, here's a bunch of stuff for you all to try out on your players...

0103 MYSTERIOUS CARVINGS: A mile-long 100’ tall cliff-face wall of black basalt runs east to west in his area facing north; the wall is covered by mysterious carvings of apparently utterly ancient age. The carvings are of dragons and snake-headed men, mixed in with a strange, undecipherable hieroglyphic script, each carving ranging in height from one inch to several feet. Rough stone altars upon which can be seen ancient bloodstains stand before sections of the carvings.

0224 ANCIENT TUNNELS: In the midst of a small copse of trees stands a hillock, along the base of which can be seen several small tunnel openings. These tunnels, which run throughout the hill and under the hill and beyond, are the remnants of an old kobold lair. Kobold skeletons can be found throughout, smashed and sliced through. The nethermost tunnel contains a hidden cache of 365 cp and a magically cursed -1 dagger with the name “Backbiter” engraved in Roglaran upon the blade. 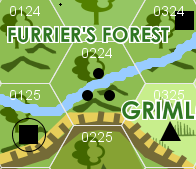 0304 SEALING GROUNDS: The beach in this area along the northern coast was once a preferred sunning area for migrating seals, and local hunters would often come here and hunt the seals as they basked in the sun during the winter. A dozen tumbledown seasonal huts, meat smoking racks, and skin drying racks can still be found in the dunes above the beach, while the bones of hundreds of seals are strewn across the area. The westernmost hut contains the skeleton of the final occupant, along with his sealing harpoon, club, two skinning knives, and 17 sp in a rotting pouch. The seals stopped coming to the area when a pack of seven sharks moved into the bay; the sharks remain, though the frenzied days of feasting on fat, lazy seals are a decade passed… 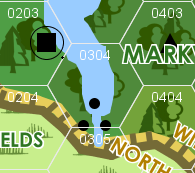 0407 PYRAMID OF SKULLS: A 20’ tall pyramid of skulls stands in the midst of the grasses of the Plateau of Bendigroth. All the skulls face east. Buried six feet in the ground under the pyramid are the remains of an ancient Tharbrian war chief, seven feet tall and armored in magical +1 scale mail with a magical +1 saber. If the skull pyramid is disturbed, the spirit of the war chief awakens and attacks those who desecrated his monument with the full powers of a spectre. If disturbed during the day, the spectre unerringly tracks down the blasphemers at night, following them until its vengeance is sated or it has been destroyed. 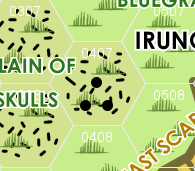 0522 RUINS OF TOAD TEMPLE: Once upon a time, long ago, the priests of the Temple of the Toad of the City State of the Invincible Overlord tried to extend their power beyond the Mermist Swamp and into all wetlands of the region. The ruined temple that stands near the center of the Froggybog Marsh between the arms of the River Buckol is a testament both to their success and their failure. The 27 wooden buildings of the small hamlet around the temple stand half submerged and rotting in the swamp. The lower steps of the temple also stand in the brackish waters, while the marble floors, walls, and columns are covered in ivy and slime. The outer walls of the 80’ diameter round temple still stand mostly intact, as do about half of the two dozen columns around its verge, but the dome and central walls have collapsed into the center, which is filled with rubble. This rubble circles the half-buried idol of the Toad, a 20’ long by 15’ wide by 15’ tall bronze statue of the Toad, now green with age and covered in ivy. Small shrubs grow out of the piled bricks and detritus, and stagnant pools of water cover about a third of the area inside the walls. The priests of this temple performed strange and terrible magical experiments with toads, and the descendants of those creations still haunt the ruins. 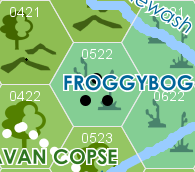 17 Troll-Blooded Giant Toads lair in and hunt around the temple and ruined hamlet; they are a scourge on the hamlets bordering the nameless swamp. These semi-intelligent creatures have the faces and maws of trolls married to the bodies of giant toads; they croak to each other in a debased form of the Troll tongue sprinkled with Demonic words and phrases. On nights of the full moon the toads gather in and around the temple ruin to sing to the idol of their god. They enjoy the flesh of humans and dwarves, though they do not go out of their way to seek such meals.

The idol is hollow, and can be entered through a secret door between the idol’s forelegs under the wide-open maw. The secret door is trapped; the trap consists of six spikes that shoot down from the lower jaw of the idol, the poison coating is obvious but ancient and no longer dangerous. The trap is charged for three shots of six spikes each.

The Codex is a unique gem-encrusted volume which includes in its pages the illuminated Book of Batrachian Joy (the holy canon of the Temple of the Toad), plus an appendix detailing the magical research into and rituals and spells necessary to create and control troll-blooded giant toads -- it is worth 3,000 gp from materials alone, but the unique rituals and spells therein increases its value to 10,000 gp to the right buyer;

Curse of the Toad: If anyone other than a duly-anointed priest of the Temple of the Toad, or someone magically blessed by such a priest, takes anything out of the treasury chamber -- even so much as a copper piece -- they must make a saving throw versus Spells or, over a period of three days, be slowly and painfully polymorphed into a giant toad (normal variety, not a troll-blooded giant toad).

Posted by James Mishler at 5:45 PM

Email ThisBlogThis!Share to TwitterShare to FacebookShare to Pinterest
Labels: Ravaged Ruins, Ravaged Ruins of the Roglaras, Region 01, Roglaras, Temple of the Toad