[Races of the Wilderlands] On Gnolls

Commoners and sages alike are much confused on the origin and nature of gnolls, for it is often said that they are the result of the joining of troll and gnome and yet they look nothing at all like those two creatures. This is for one very good, simple reason – the gnolls with which we are all most familiar are not the original gnolls, but merely one of a number of different gnoll breeds, and the most common and best known. 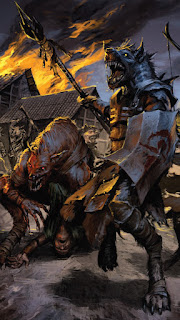 The original gnolls – or joinings, which is what the word “gnoll” means in the ancient tongue of Torsh – were formed from the fusion of troll and gnome. These are what are today known as the Trollkin, or troll-gnoll, and they do indeed look much like their ancient origins suggest – for they have the size of tall dwarves, the build of gnomes, and the skin and facial features (and sometimes, the regenerative abilities) of trolls. They were called “joinings” for the simple reason that they were created by magically “joining” the blood and essence of the two races together to create a third. Torsh, an empire found far to the north and east in what are now haunted wastelands north of Karak and east of Tarsh – used these gnolls, as they called them in their tongue, as foot-soldiers in their great interdimensional Portal Wars.

Somehow, long ages later, the rituals to create gnolls were discovered by the Ghinorians in the far south. Some sages believe that Upper Ghinor had been an outpost of Torsh, and the Ghinorians discovered the rituals in the ruins thereof. I believe it to be a strong possibility, but then, too, the early Ghinorians were also known to be great explorers, so it is not impossible to believe that they may have discovered the rituals in the ruins of Old Torsh itself. Either way, they discovered the rituals and put them to good – or some might say, terrible – use in creating what we know today as the Common Gnoll, or hyena-folk, merging human and hyena to create a monstrously violent beast-man. These they created for their wars against the Demon Principalities on their southern border, for the wastelands thereof are replete with hyenas, and the hyena-folk thrive in such regions.

Later, during the height of their empire, when they required a more tractable servant race, they similarly created the Anubim, or dog-folk, merging human with dog and jackal. This admixture proved far more intelligent and capable, and spread throughout the Ghinorian Empire as guards and servants, even as the hyena-folk spread as a warrior-caste, often under the leadership of their dog-folk cousins. Unfortunately for the Wilderlands at large, when the Ghinorian Empire collapsed, the hyena-folk remained behind, and migrated further afield in great numbers. They served in small armies as mercenaries of the Orichalan Dragon Empire, and eventually turned coat against them to serve the Viridian Empire, for which they were settled in the depopulated then-borderlands of Lyoophiath… with the resulting death and destruction many centuries later from the migrations during the Gnoll Times.

Over their long migrations, the hyena-folk’s dog-folk cousins often travelled with them, or at least along the same routes, though in smaller numbers. At some point they picked up wolf-blood – how is still under much debate among sages –  and is not a part of this treatise. Howsoever they did, these Vargr, or wolf-folk gnolls spread even further afield, first through the Elephas, and thence into Valon, and finally into Tarsh, the Valley of the Ancients, and Tarantis – where they encountered the fourth major gnoll breed, the Meriem, or cat-folk.

At some as yet undiscerned time in the past, at some unknown locale, someone used the ritual of joining to create a combination between elf and cat. Contrary to legend and rumor, the Meriem are as humanoid as trollkin or dog-folk, though like hyena-folk and wolf-folk they can run at high speed on all fours; also, they are perfectly capable of speech, but possess a system of secret hand signals that they may communicate without being heard. Unlike their trollkin, hyena-folk, dog-folk, and wolf-folk cousins, the Meriem have not spread far, and are known today to be found only in Tarantis and along the Ebony Coast among the Matani... though some have taken to piracy on the Wine-Dark Sea.

There are other, minor races of joinings to be found – the bear-folk of the Werewoods (an extraordinary mix of human, bear, and werebear), the fish-folk of the Sea of Five Winds (which may or may not be joinings), and the rat-folk that are seemingly ubiquitous in urban regions throughout the Wilderlands – being only the most prominent of these beings. It seems these days, any transmuter worth his salt tries his hand at the ancient joinings ritual – if he can find it. And so the most potent of transmuters and wizards possess their own small armies of strange joinings, a testament to the power of the ancient rituals of Old Torsh, and to the horrors that some wizards are willing to perpetuate in the name of their art.