Rob Conley, author of the Majestic Wilderlands and Wilderlands cartographer, has released his new color version of the map of the City State of the Invincible Overlord! This all-new map, based on the originals, is offered in multiple versions for ease of play.

And even better, he offers a complementary copy of the product to the City State of the Invincible Overlord Kickstarter backers! 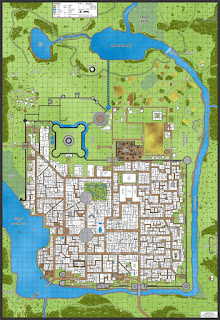 From Rob's post on his Bat in the Attic Blog:

Bat in the Attic Games and Judges Guild is pleased to announce the release of the City State of the Invincible Overlord, Color Map on Friday November 24th 2017.

In 1976, Bob Bledsaw and Bill Owens went into business as Judges Guild. Their initial offering was centered on a magnificent 22" by 34" map of the City State of Invincible Overlord. First appearing at Gen Con IX, it was sold literally out of the trunk of a car during the convention.

Now forty years later that map has been redrawn in full color. It preserves all the original detail while adding new ones like rocks, foot paths, trees, and shrubbery. This has been checked against the no-name city blueprint that was the first draft of the map. This helped to clarify details obscured by the offset printing process used in the 1970s.

This map is not a scanned image of the original but has been redrawn from scratch.

This product contains several versions of the map.

This is an authorized Judges Guild release for the Wilderlands of High Fantasy.

A coupon for a complimentary copy will be offered to all backers of the City State of the Invincible Overlord Kickstarter. Please check the comment section of the Kickstarter for instructions.

This product only contains color maps of the City State of the Invincible Overlord. The original guidebook and map can be purchased from Judges Guild on RPGNow/DriveThruRPG.

The original guidebook can be found on RPGNow/DriveThruRPG at

Rob posted this in the related Kickstarter:


"I am Rob Conley one of the cartographers on the Wilderlands Maps. I wish I knew more about what going on but I haven't had any communication with Robert Bledsaw III for a while. I do have some good news for the backers of this Kickstarter. As you all know I got the City State map and my Wilderlands maps done in late 2016. It now been a year and nothing has happened.

In addition to doing work for this Kickstarter, I have a business relationship with Bob III's father Robert Bledsaw II through my company, Bat in the Attic Games. I have a limited license to produce material for my take on the Wilderlands known as the Majestic Wilderlands. So I decided to talk to Robert Bledsaw II about the maps. There are things that could effect the Wilderlands maps so I can't do anything at the moment with them. However that not the case with the City State map. So we talked and came to a license arrangement. I have permission to release the map as a Judges Guild authorized product for the Wilderlands of High Fantasy through Bat in the Attic Games.

I am not responsible for what happened with the Kickstarter nor do I have any financial stake. But we are a small hobby and the Judges Guild name has been dragged through the mud because of the mismanagement of this Kickstarter. That effects what I do with my work as Bat in the Attic Games. I feel what is right is to offer each and every Kickstarter backer a complimentary coupon for the release. Understand it is PDF only. RPGNow/DriveThruRPG are not able to print poster sized maps through print on demand. I think you will find that the City State Map PDF package to be a nice one.

Now for the logistics. This Friday I am going to post a code in the comment section of the September 2017 backer only post. You can use that code to get your complimentary copy. I would ask you spread the word to any other backer you know. So you know the number of times the code can be used is limited to the number of backers (965). I will be posting my email address in the comment so you can contact me if there are any issue.

As for the Wilderlands maps, if there no movement by March 2018, then I will talk again with Robert Bledsaw II and see what can be done."
Posted by James Mishler at 9:36 AM No comments: