Human Ethnic Groups in the Wilderlands

Here's a quick and dirty map showing the broad, general distribution of the major ethnic groups of humans and near-humans in the Wilderlands. Also, a quick and dirty take on each of the major listed cultural groups. Note that this is not at all exhaustive, merely showing the major groups and the areas where they have generally migrated to and perhaps mixed with other groups to form other, as yet unnamed groups... 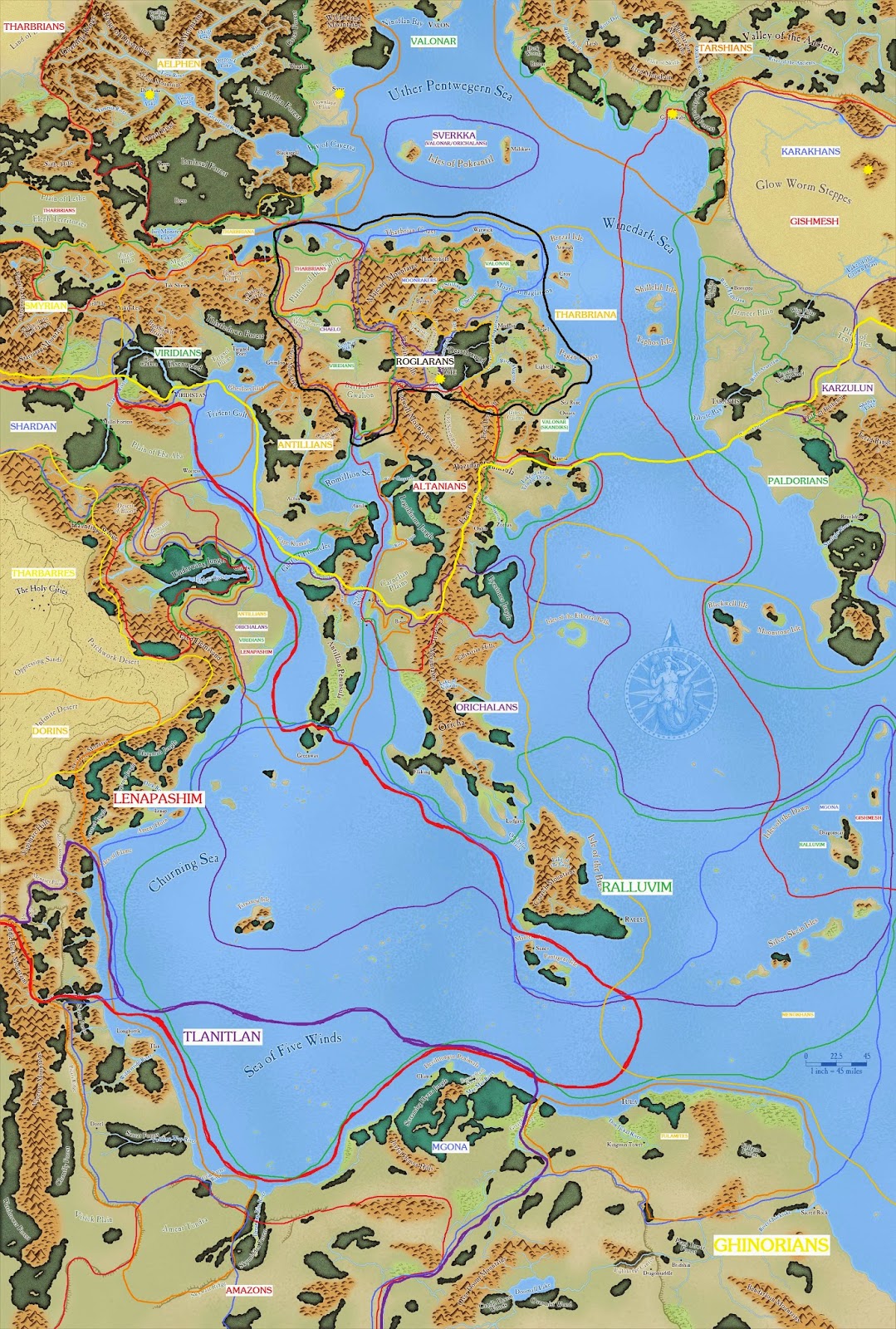 As usual, right click and open in another tab to embiggen

Email ThisBlogThis!Share to TwitterShare to FacebookShare to Pinterest
Labels: Humans of the Wilderlands, Wilderlands

Adventuring in the Wilderlands

Here's an oldie but a goody... I made this map some years back and thought that it and the list were lost, but found them again. The map includes all the major and many of the minor adventures published by Judges Guild, together with a list of where it is in the Wilderlands, where in the canon it can be found, the kind of adventure, the levels of the adventure, and the system used.

I should note the map is from the Necromancer Games version of the Player's Guide to the Wilderlands. It is still available through Judges Guild.

As usual, right click and open in another tab to embiggen. 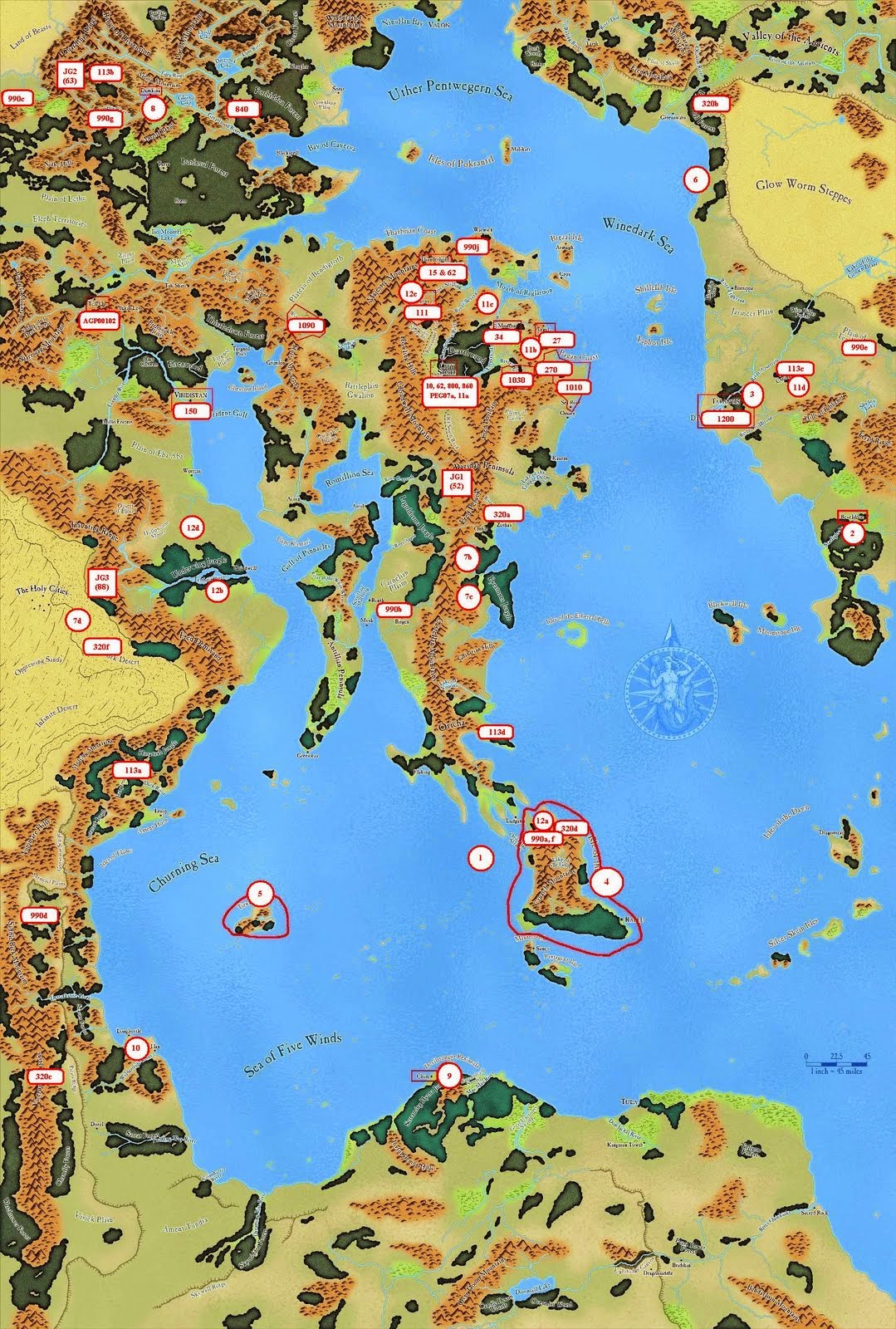 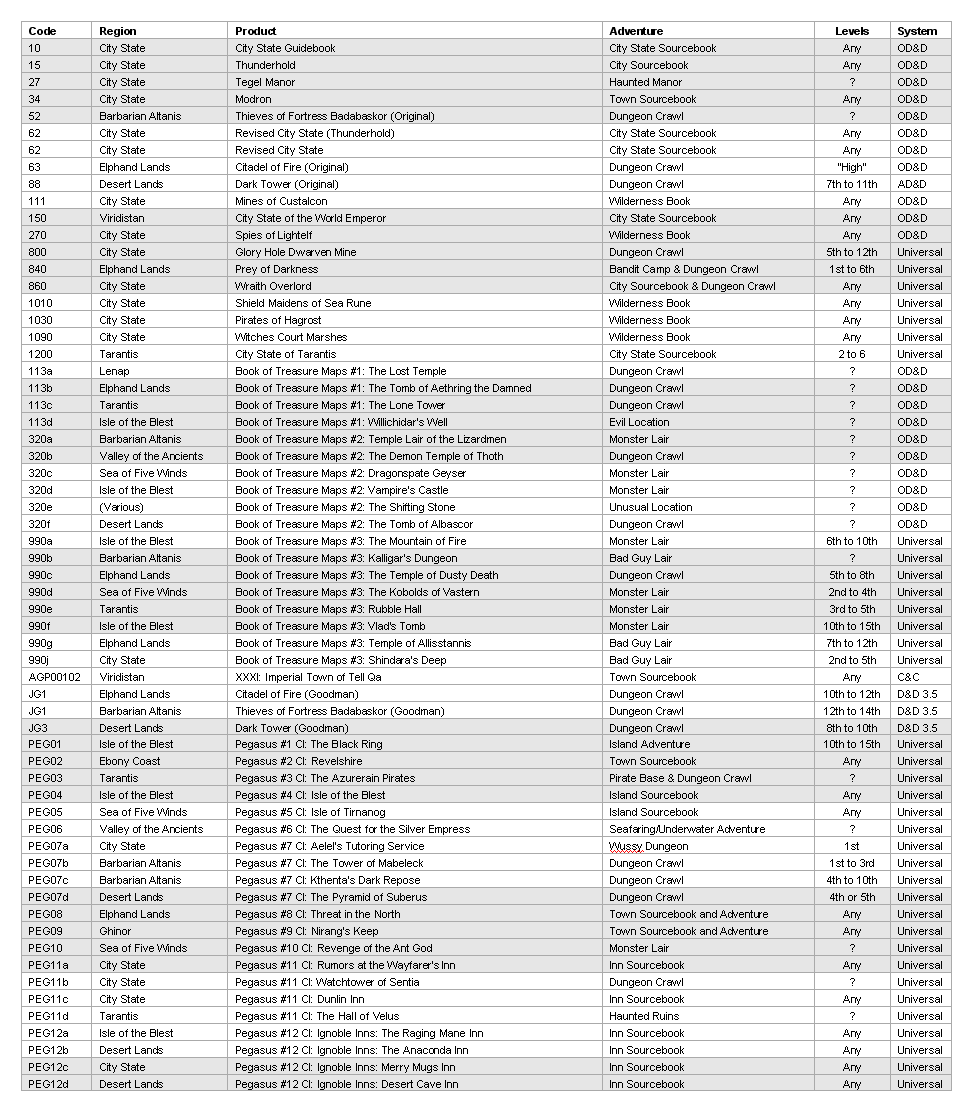 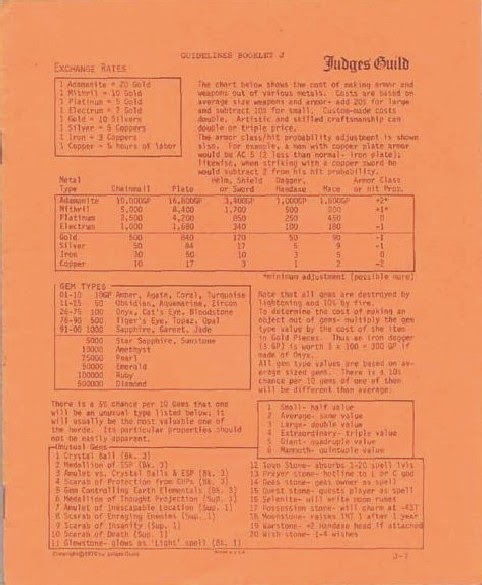 This is the original December, 1976 Guidelines Booklet J outlining Thunderhold -- the castle of the Dwarven King -- and the Sunstone Caverns. It includes both Players and Judges Maps, and the four additional Dungeon Level Maps (J1-4). These gray-tone scans are pulled from Bob Bledsaw’s personal in-house copy. The maps were created by Bob Bledsaw, Bill Owen, and Bob Bledsaw II. This e-book also contains the additional note-sheet from 1976, and Booty List flyer.

The Dwarves of Thunderhold originated in the Majestic Fastness, deep in the Majestic Mountains. However, they were routed out by the Dragon, Anaelegorn, and its three young. The Dwarves journeyed north to the Sunstone Caverns, rumored to possess a load of Mithral. There they found and defeated an army of Gnolls who held the caverns and the adjacent Castle. In olden times, the Castle was the stronghold of a hardy race of Men called the Moonrakers, many descendants of which now live in the Castle Village. In the olden days, the Moonrakers traded with tribe of Dwarves that then resided in the two dungeons outside the Castle. With time and the outside invaders, the Moonraker/Dwarven alliance eventually broke down in the face of Gnoll invasion led by the Evil Wizard, Lychin, and the Minotaur-Priest, Bragash. The Moonrakers were forced out of their Castle, and the earlier tribe of Dwarves was believed to be exterminated. The present Dwarves and their leader, Nordre Iron-Helm, destroyed the Gnolls and their Evil Wizard, but the Minotaur-Priest escaped down into the Sunstone Caverns...

Note that the images in this post are not from the scans; they are from the Acaeum Judges Guild Subweb.

Click here to buy Thunderhold at DriveThruRPG
Posted by James Mishler at 9:33 AM No comments:

The Three Witches of Marmon Mist 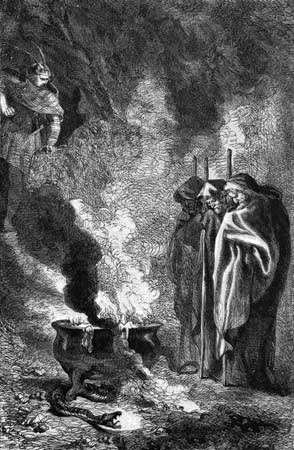 Fillet of a fenny snake,
In the cauldron boil and bake;
Eye of newt and toe of frog,
Wool of bat and tongue of dog,
Adder's fork and blind-worm's sting,
Lizard's leg and howlet's wing,
For a charm of powerful trouble,
Like a hell-broth boil and bubble.

Included in the Guidebook to Map 6 of the City State of the World Emperor was a small entry concerning the most powerful (perhaps) mortal beings in the Wilderlands: the three Witches of Marmon. Modeled after the classic three witches/hags/fates of legend and lore, it was of course only a matter of time that such figures appeared in the Wilderlands canon. 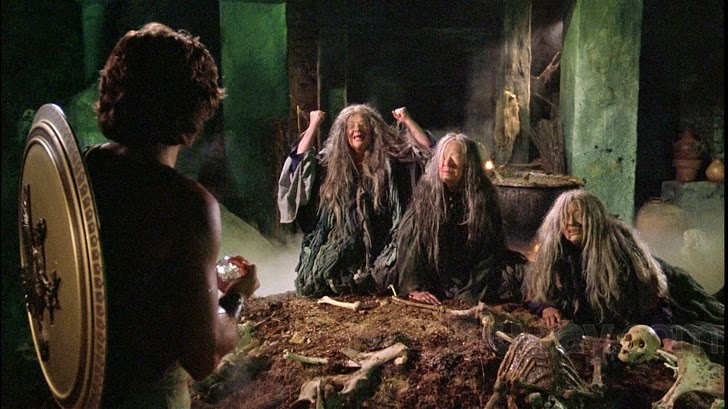 Other than the notes on their level of power and the magic items they command, little information is provided on the sisters and what they actually do. It was as usually, left up to the Judge to determine how the three fit into his version of the Wilderlands. Though much is made of their power and danger by the World Emperor, for the witches’ own part they “don’t care one way or another,” so don’t seem to be the danger people think they are.

According to the text, “Chael is the leader of the three and is the most creative; Phyth is the most unstable and prefers to molest or eat intruders; Gaedd is a steadying influence and helps them keep a low profile.” This sounds about right for the direction that most of the “Weird Sisters,” as such characters are usually called, would take. In Ancient Europe through the Celtic-Germanic and into the Imperial era they were known as the Matres/Matronae, or Mothers/Matrons, or at times the Maiden, Mother, and Crone. In the case of the Norse Norns, of course, they are Urd, Verdandi, and Skuld (Past, Present, Future); with the Greek Moirai, they are Clotho, Lachesis, and Atropos (Birth, Life, and Death). The Three Graeae of the legend of Perseus, the Three Graces… the list goes on and on. 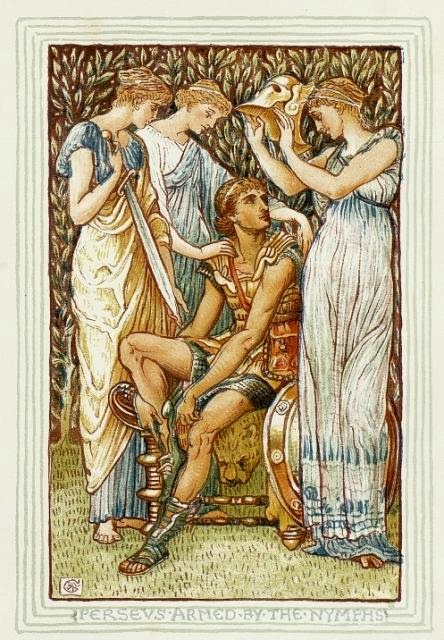 As with the classical figures, the Witches of Marmon are associated with spinning; additionally, “strange, occult items line the walls” of their long hut. They are incredibly ancient, consider themselves “outside moral alignments,” and are quite private; the text notes that they keep their swamp supplied with frogs, and later notes that “Intruders seldom leave like they came,” intimating that the many frogs that live in their swamps are transformed intruders.

They are definitely Witches, though not seemingly associated with the witches described in the Wilderness Book, Witches Court Marshes. There, Mordridda, the Kanak’raudak Dogorn, the Mystic Mother and Guardian of all Evil Witches resides. She is but of 19th level, while the Witches of Marmon are 31st to 36th level. All are experts at shapechanging, able at will to take on the form of any animal, humanoid, or other being, of any apparent Social Level or Charisma. They most often appear as either hags or beautiful females with an 18 Charisma. If you are using Labyrinth Lord or other Basic/Expert style systems, they are best emulated by using the Classical Witch from Timothy Brannan’s The Witch: A New Class forBasic Era Games.

They live in a large, long hut, where their spinning equipment and occult items can be found. They also have several other huts – I would say likely three, one for each of the witches – which contain 30 to 60 “magical items of great power.” They have not been stealing the items from the World Emperor – they believe that it is Whitefire is behind that. Apparently they acquire the items in trade from those who come to them for wisdom, knowledge, or power. 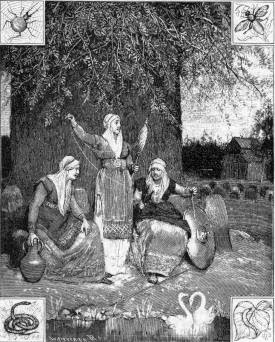 As far as how they could be used in a Wilderlands campaign, though of very high level and great power, they can easily be used in a campaign from the start. Legends and rumors of them and their power – their ability to trade magical items, knowledge, and favors – reach to all corners of the Wilderlands. Whenever characters get in over their heads, or are stumped as to their next move, they might be reminded of the Witches and what they have to offer. Of course, their price is always great – two items of greater power for one, three dangerous secrets for a bit of lost lore…

And even getting to them can be quite an adventure itself.
Posted by James Mishler at 7:07 PM 1 comment: 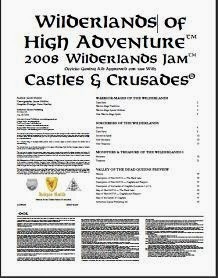 Sorcerers of the Wilderlands was as described here, a love-letter of sorts to the classic demons and sorcerers of sword & sorcery fiction. 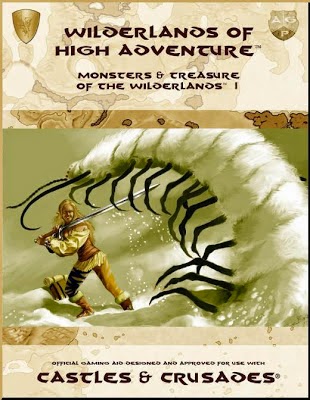 Monsters & Treasures of the Wilderlands I was, as the name suggested, to be the first in a series of M&Ts detailing the unique and interesting monsters of the Wilderlands. The first included a few missing monsters from the C&C canon and added some odd critters. This was later expanded into its own product with another 27 monsters and additional 16 magic items, the only full-color cover, fully-illustrated product AGP ever published. Sadly, it was the lack of success of that version of the M&T that was the canary in the coal mine; I should have noticed from the slack sales on the full version of the M&T that perhaps things were not going as well as hoped for AGP.

The "preview" of the Valley of the Dead Queens, as mentioned, ended up being the only view of that product. It was to be a sandbox product, much like the Wilderness books from the Wilderlands of High Fantasy, but even more detailed and with lots of little adventures in greater detail. I always loved the Wilderness books, though thought that there was much more that could be done with each Five-Mile Hex. The thoughts behind that eventually led me to my 25HEX product line idea, which is still in the works.