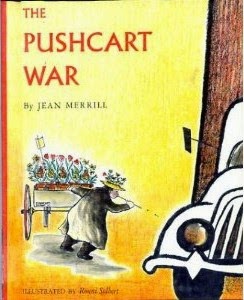 AGP ended up going out with a bang and a whimper, all at once. My final product – though it certainly was not intended to be such when I was writing it – ended up being 100 Street Vendors of the . If I recall correctly, I started working on street vendors as I noticed that there was a gap… carts and vendors were noted as being in several places in the original , but few if any specific vendors were ever mentioned. That, plus a thorough reading of the “Open Market” section, a recent session where our party was offered rat on a stick, and fond memories of the classic children’s novel The Pushcart War, inspired me to write up some street vendors. It was merely going to be a list of 20 or so, included in what was supposed to be the second issue of Adventure Games Journal… 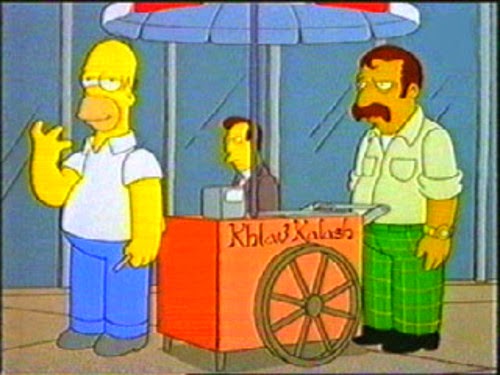 Well, by now, most of you know that I can’t write 20 listings if I can go on to 30, or 50, or 100. And so over time it grew to 100 listings, filling gaps in shops and services that were missing in the , or that needed some more interesting competition. A few, such as the Hot Tamale vendor, were inspired by notes in the Guide to the ; others were inspired from literature, movies, or television shows. There are a lot of pop-culture references hidden in there, Easter-egg style. A few personal references, too, that only a few will ever understand.

As you may have noticed, most of the credits in our JMG products include my wife, Jodi, as a co-author or assistant. While I had turned to her for advice and inspiration on all the AGP products, 100 Street Vendors was the first of my products in which she should really get an assist line, if not co-author credit. She was invaluable when I was working on 100 Street Vendors, and I dare say it never would have been finished if not for her. I like to think that I wrote it for her, after a fashion; to this day, when we are bored and I'm not up for writing, we pull out her tattered copy (first printed copy, ever), roll up a street vendor, and start telling each other tales about him or her and their adventures in the City State. 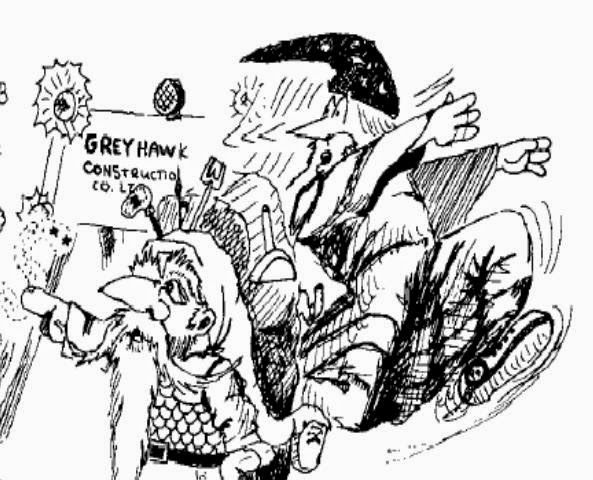 The biggest difficulty was putting together the price lists for all the vendors; I scoured dozens of sources, historical and game, to find out what prices the goods and services offered might reasonably have cost. At first I thought I had put too much thought into the whole process; then, one session while using the vendors, my players showed their usual perspicacity and penurious natures when they actually started haggling over the price of some pipeweed... and these, heroes with several levels and plenty of loot. So yes, I guess it really kind of mattered, after all.

Sadly, even though 100 Street Vendors got plenty of reviews and good word of mouth, sales were dismal. So dismal, in fact, that it was the final nail in the coffin, and the swan song for AGP, which folded shortly after the release. Heck, I never even got around to taking a picture of the print booklet version for the Catablog, as so few had ever been printed… 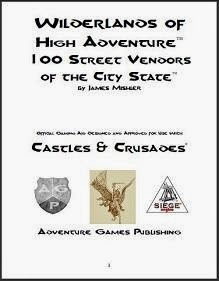 This 64-page booklet is the first expansion for the  of the Invincible Overlord since the release of the Wraith Overlord: Terror Beneath the City State adventure in 1981. It includes 100 street vendors selling everything from rat-on-a-stick and pastries to used weapons and second-hand slaves. Each description includes the stats for the vendor, NPC details, descripton of the vendor's wagon or cart, price list of goods and services, cash box contents, NPC disposition, and one or more rumors. 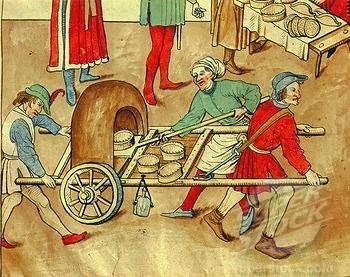 100 Street Vendors of the  is still available in PDF format through Judges Guild.

Click here to buy 100 Street Vendors of the City State at RPGNow
Posted by James Mishler at 6:43 PM